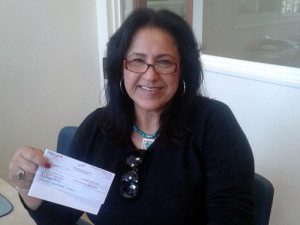 Esther, a single mother: “The banks don’t acknowledge you, they don’t understand problems or hardships”

Esther Yaakobi is a single mother of three and is the sole carer for her youngest, Yosef (16) who is severely handicapped and autistic.

“I work, but not at a consistent regular job, because I’ve been taking care of him all these years.”

Esther applied for an IFLA loan in 2002, when she needed help in adapting her home to her son’s needs.

After years of living in a third floor apartment, Esther felt that she could no longer manage the stairs.

“For sixteen years we had to live without an elevator; I had no other options. Now I am tired. The kids have grown up, the older two who used to help me have left home and I’ve grown older and started to feel backaches.”

She looked for ways to fund the move and found it very challenging.

“The banks don’t acknowledge you, don’t understand if there are problems or hardships.”

She then decided to return to IFLA: “With you it was simple, all very efficient. I was told what papers to bring, I did so and that was it. You helped me with dignity, without making me feel inadequate for needing help.”

The funding for Esther’s loan came from the Sabbah Family, who twenty-five years ago decided to establish a Named Loan Fund that will strengthen Israeli society. They took to heart the idea of mutual responsibility and care for each other, joining IFLA in the goal to provide financial aid with dignity to working Israelis in need.

Thanks to the donation made by the Sabbah family, Esther together with many others are all able to support themselves with dignity.

IFLA provides interest-free loans, and as the monies are returned each shekel that is payed back is immediately loaned out to new borrowers, thus keeping a perpetual helping machine up and running.

The Sabbah Fund has continued to give more and more loans over the years, and the original donation to the fund have been recycled over nine times!