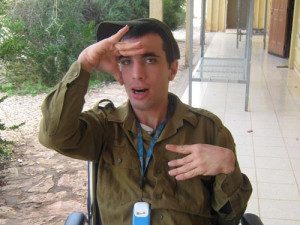 Nineteen years ago, Shirley and Naftali Solvy opened their local newspaper to find an article about a 17 months old baby with Cerebral Palsy who was abandoned at the hospital and in need of a warm home.

Already having five healthy children of their own, the couple had decided that the time has come for them to help other children.

“From the moment we have decided to adopt Shai and despite the doctors’ prognosis, we believed in his ability to grow and get better.

“Over the years, we applied for three interest-free loans at IFLA to help finance the surgeries and equipment needed for Shai”.

Shai has made tremendous progress. He volunteered for a unique program in the Israel Defense Forces will soon start his National Service.

At the same time he started working at the local post office, and even plans of climbing the stairs of Haifa’s Bahá’í World Centre (approximately 1,700 steps!).

“He doesn’t consider himself an invalid,” explains his mother, trying to capture with words Shai’s strength of spirit, “It was tough for him, but he knows what he wants out of life – and so he will get it.”

The Solvy family is now raising funds toward the establishment of a named loan fund at IFLA in order to celebrate the miracle of Shai’s story.

Shirley and Naftali chose to give back even more by joining in the work of IFLA, who for the last twenty-five years have been working to aid working Israelis in need as well as small businesses.

Join the Solvys and other supporters of the Israel Free Loan Association – with your donation we will act together to empower those in need and strengthen Israeli society!