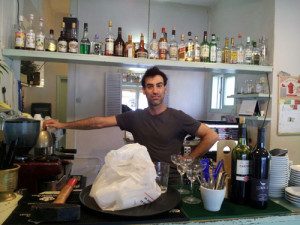 The loan that saved a Southern restaurant after Operation Protective Edge

It is both during times of peace and of military conflict that the Israel Free Loan Association (IFLA) and its supporters work to recognize and answer challenges that Israelis are facing.

The attacks on Southern Israel during The summer of 2014 showed us how vulnerable small businesses are during such conflicts.

Many had to operate in a limited capacity or were completely closed, due to lack of shelter at the business or simply no customers.

Adhering to the idea of mutual responsibility, IFLA and its supporters rose to the occasion, helping small businesses weather economic loss due to rocket attacks.

Among the hundreds of small business owners aided by IFLA’s emergency loans following Operation Protective Edge were Yael from Be’er Sheva, the Eliyahu family from Pa’amei Tashaz and the Barco brothers of Gedera.

Tamir Cooper and his partner Ben Aviv were also among the small business owners asking for help following the events of that summer. They opened their restaurant, named Visla, only a year before, and did not envision that they will soon find themselves under rocket fire.

While having an average of 150 daily clients before the start of Operation Protective Edge, suddenly that number plummeted to 15. It took the restaurant four whole months to recover from this blow.

“The government was out of the picture”, Tamir explains, “Only after months, we received a grant of 25 thousand shekels, and this is after we reported losses of 200 thousand shekels.

“At the time we needed money immediately, and this is why we went to IFLA, whom we felt were like our oxygen supply. A week and a half after we first contacted IFLA we already received the money”.

Without the loan they would have had to close the business.

For the last twenty-five years IFLA has been working to aid working Israelis in need as well as small businesses – both day-to-day and in time of national emergencies.

Join the supporters of the Israel Free Loan Association – with your donation we will act together to empower those in need and strengthen Israeli society!